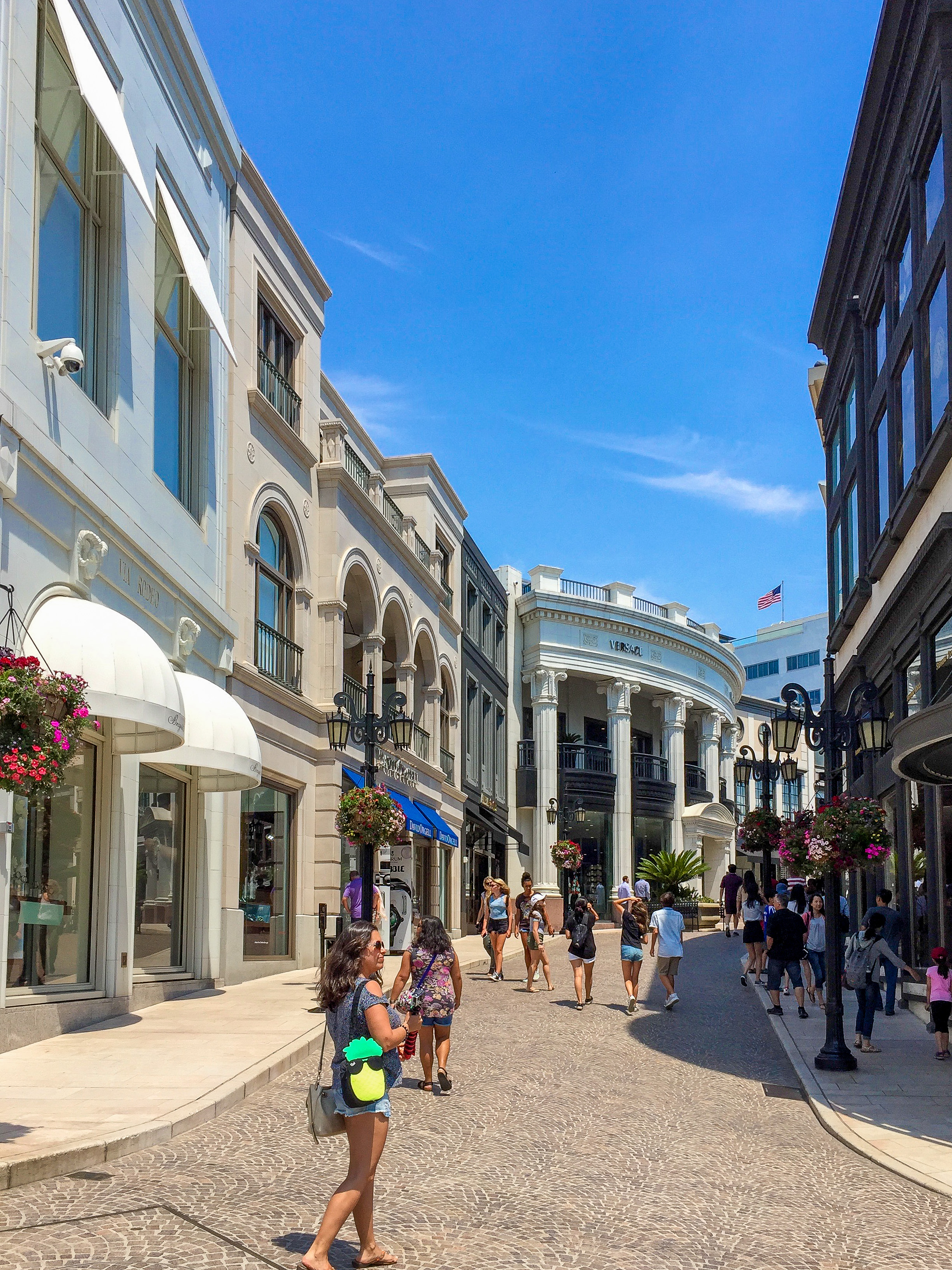 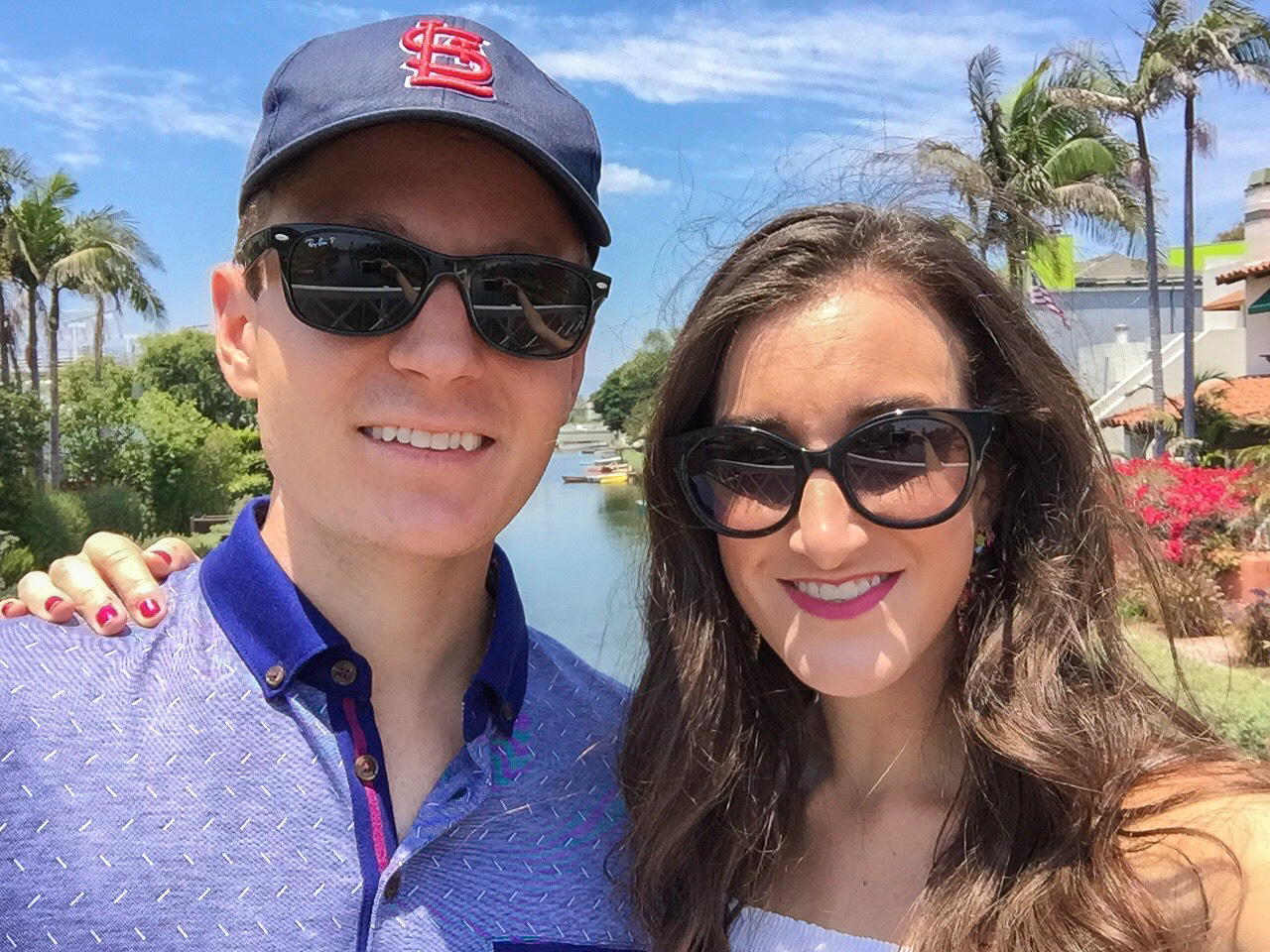 As you might know, Joe and I took a weekend trip to Los Angeles in July and I wanted to put a guide together detailing everything we did on our short but eventful four-day trip! We flew out from Cincinnati on a Thursday morning and took a red eye home Sunday night. It was a short trip, but we were able to pack in a ton of fun things in LA. I wanted to share a list of all the things we got to see and do while in Los Angeles in case you need some inspiration for a weekend getaway.

We arrived in LA around 10:30 in the morning Thursday. As painful as it was to wake up at 4 a.m. Eastern time for our flight at 7, I’ll admit it was pretty nice arriving on the West Coast early to enjoy a full day there.

LAX is pure madness at all hours, but using Uber the entire trip was seriously the way to go. Everyone has different preferences, but Joe and I could not stop commenting how grateful we were that we didn’t have a car to drive/stress about the whole trip. It really did take a huge burden off. It’s best to let the experienced LA Uber drivers take the wheel. Also, the prices really weren’t too outrageous. The most expensive rides were to and from the airport and the days we ventured out to Venice and Santa Monica. We had many trips that were $10 and below, which is pretty amazing if you ask me!

We stayed at The Beverly Hilton, which I’d highly recommend. The location alone is a huge selling point on top of it being a famous historical hotel in Beverly Hills. I have a few friends in Los Angeles, and everyone said Beverly Hills would be a nice central location to stay in. I can attest that this is true. Joe and I walked to Rodeo Drive and the other famed Beverly Hills shopping streets every day, and it only took about ten minutes to walk there. We also had a pretty easy time getting to the coastal areas like Venice and Santa Monica.

After checking into our hotel we walked around Rodeo Drive and the surrounding area. We were both starving, so we headed to a restaurant in the heart of Rodeo to eat. I thought they’d be good with my nut allergy, but honestly, the place was a total tourist trap (and unnecessarily pretentious) and Joe and I got up after about five minutes of sitting there. Not to mention when I informed our server about my nut allergy he looked at me like I was crazy. Nope!

We ventured to another place, and honestly, it was equally as disappointing for my food allergies. Again, the waiter was unnecessarily snobby and I just didn’t feel safe eating there. Luckily I had spotted a Chipotle (in a beautiful Beverly Hills building unsurprisingly) near Rodeo and it would prove to be one of my most visited spots the entire trip. I was worried it was a mirage at first because I was so famished and delirious, but fortunately, it was real.

I had made a reservation at Il Pastaio in Beverly Hills for dinner. It’s a quaint Italian restaurant in the heart of Beverly Hills, and it’s a prime spot for good food and people watching. They have an indoor dining room but 95% of the patrons were eating outside, which I would recommend because it’s such a nice setting. 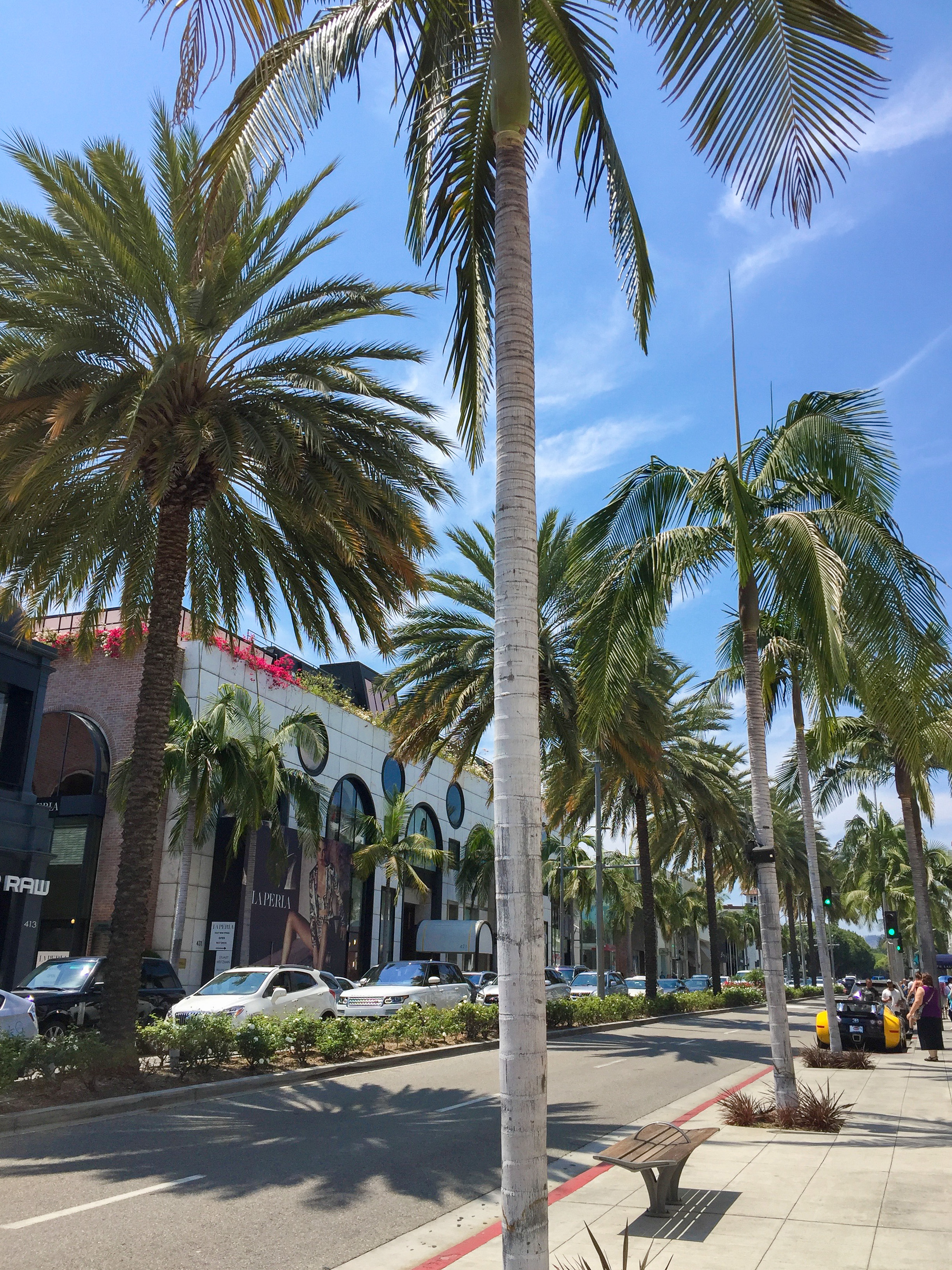 We spent a nice chunk of our day at The Getty, a massive museum with incredible views of Los Angeles. They have a ton of different exhibits, but the campus itself was my favorite part. It covers a lot of ground and has a ton of fountains, gardens and unique architectural features that make it well worth the trip.

We also spent some much-needed lounge time at The Beverly Hilton pool. We got some drinks and did a whole lot of nothing for a few hours. They also had an adorable La Marca Prosecco cart by the pool that I wanted to take home with me.

Joe and I grabbed lunch at this amazing Italian restaurant in Brentwood called Pizzicotto. If you’re looking for high quality authentic Italian food this is the place to go. Everyone who worked there was so sweet and we both really enjoyed our food. They have an extensive menu and the atmosphere was something my Italian grandma definitely would have approved of.

For dinner, we made reservations at BOA, an upscale steakhouse in West Hollywood. I knew it was a celebrity hotspot, but I was most excited to get dressed up for the night. Also, steakhouses have always been pretty accommodating for my nut allergy, so that sealed the deal for me.

Long story short, our dinner was incredible. We had one of the best tables in the outdoor part of the restaurant, and on top of that, we had a pretty cool celebrity sighting! Khloe Kardashian and Tristan Thompson came into BOA while we were there, and as dorky as this sounds I was SO EXCITED!!! What’s even crazier is that after dinner I stopped into the bathroom and low and behold it was just me and Khloe alone in the bathroom washing our hands next to each other! It was such a surreal, exciting experience and was a fun story to tell everyone.

It’s worth mentioning that the food itself at BOA is to die for. The food, scene and possible celebrity sightings make it a perfect LA experience. We will definitely be going back!

We Ubered out to Venice Beach and spent some time wandering around there before heading to the Venice Canal District. I’m going to be honest here and say that I didn’t love Venice Beach. I was already anticipating that before we went but I felt like it was one of those things you at least need to experience once. It was crowded and chaotic and felt a bit overwhelming. There’s a ton going on and you pretty much feel like cattle being herded if you don’t want to get trampled by people. Joe and I agreed that we had our fill about twenty minutes in. Walking along the canals was pretty cool. I’ve seen them in so many movies and TV shows, so it was fun to be there in real life and was much quieter than the touristy beach scene. 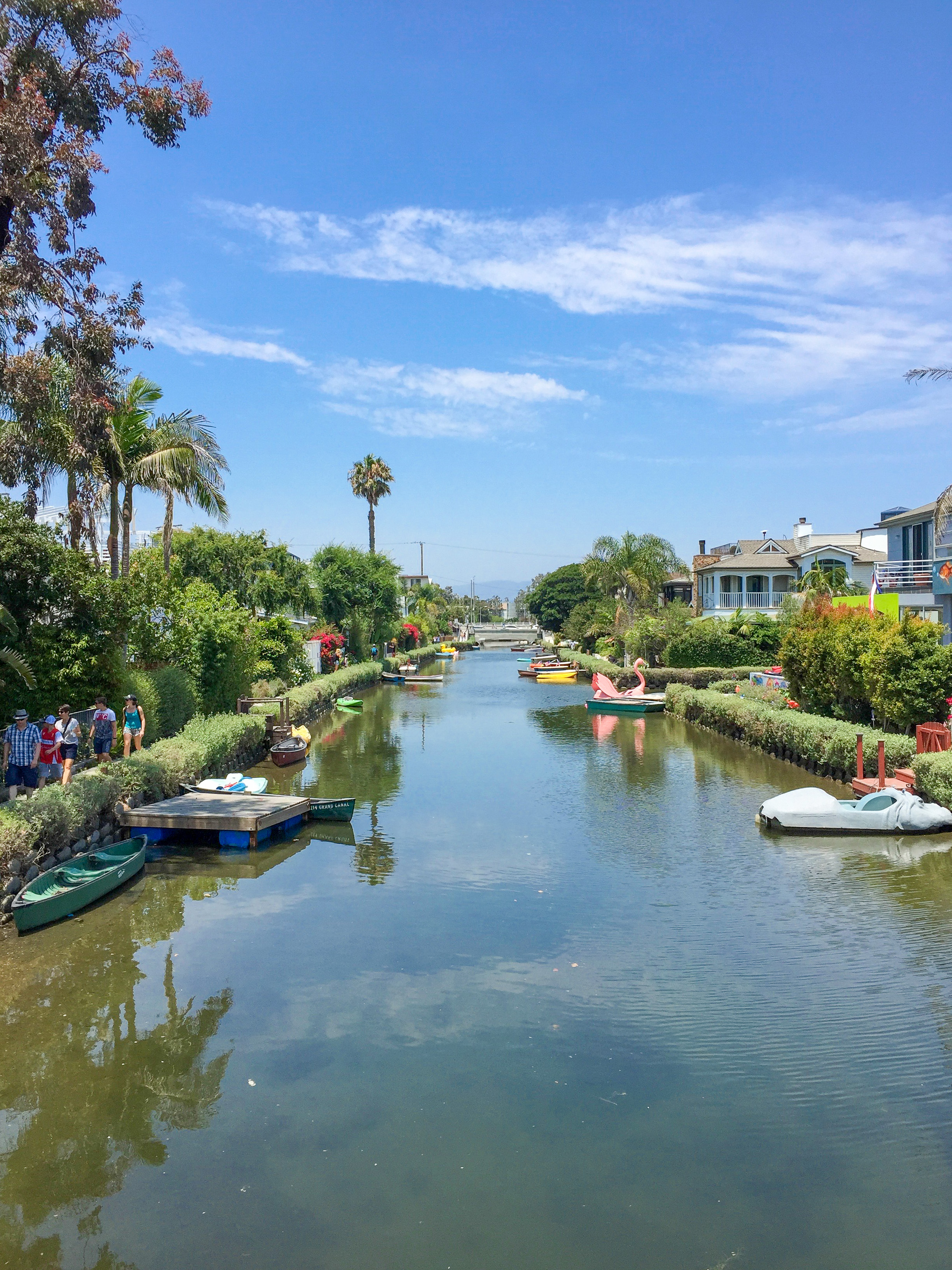 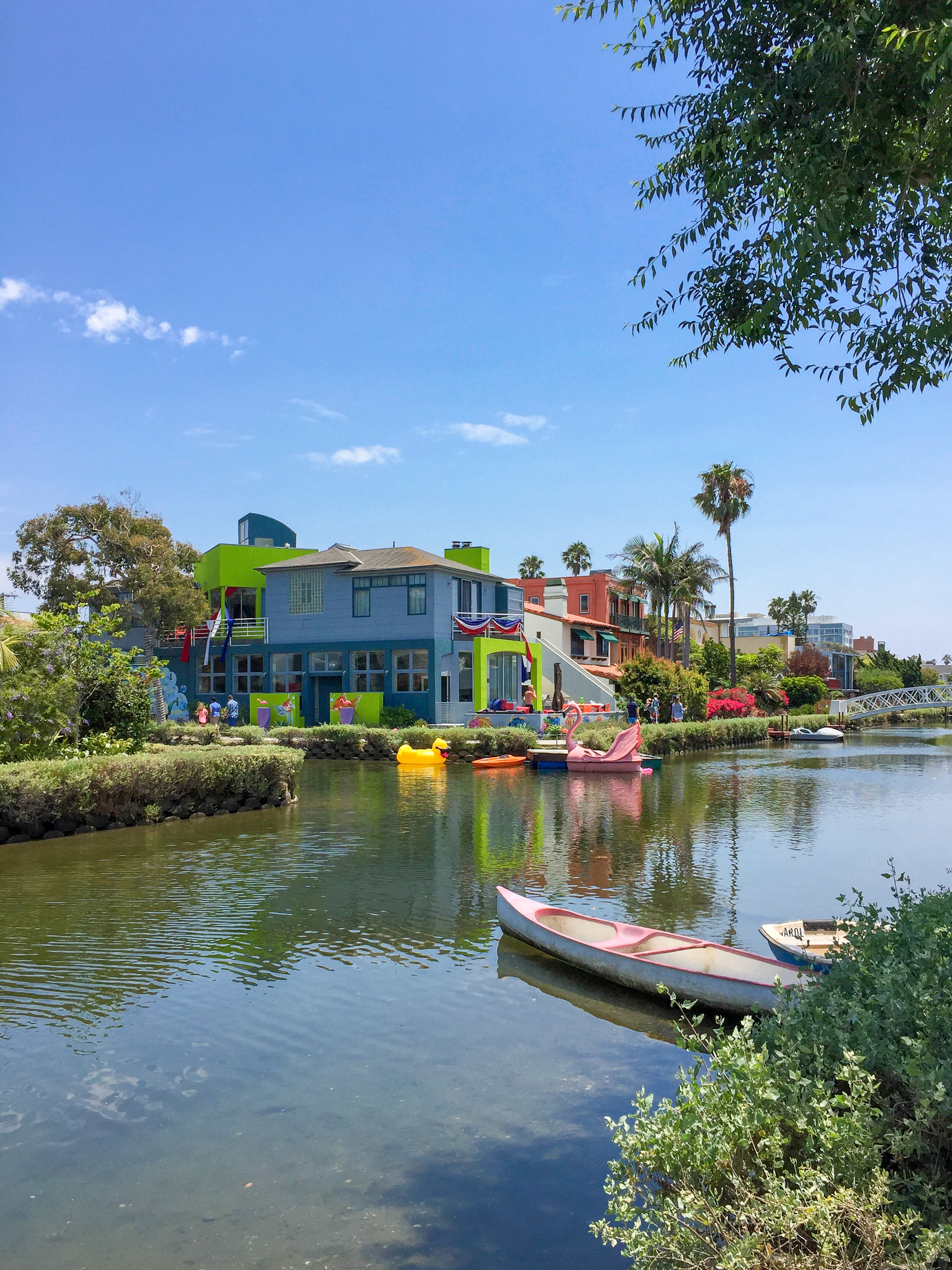 After that, we made the short walk to Abbot Kinney, a shopping district in Venice. This was at the top of my LA list, so I was glad we went. Abbot Kinney is a mile long stretch of shopping, art, and food so as you can imagine there’s a ton to explore here. The range of shopping is wide, with stores like Alexis Bittar, Cuyana, Caudalie, Lucky Brand, Roots and Tom’s. Joe and I spent hours popping into all the different stores, and I really enjoyed it.

Joe and I grabbed dinner in West Hollywood, so we walked around there afterward. It was earlier in the night, so the bars weren’t crazy yet which made it nice for taking in the scenes.

We had dinner at Baby Blue’s BBQ in West Hollywood and really enjoyed it. The restaurant is super casual and inexpensive, which was a nice little break. My favorite part was that the entire restaurant is nut free! That truly never happens, and I can’t even explain how good of a feeling it is to eat somewhere that’s 100% free of your allergen.

On Sunday we met up with a college friend in Santa Monica. We didn’t get to explore too much around the area, but the parts we saw we really enjoyed. We checked out Santa Monica Pier and walked along the beach for awhile, which was really nice.

We had a red-eye Sunday night which meant we had all day Sunday to explore. I was trying to stay strong the whole trip and not do any shopping but I caved and decided I needed to hit some stores on Rodeo Drive.

I love Club Monaco, so Joe and I headed there first. Rodeo Drive is kind of like a domino effect because once you venture to one store you end up seeing five more down the street you have to shop at as well. This theory proved true because once we left Club Monaco I spotted an & Other Stories shop and knew I needed to go there ASAP. The store was massive and you could easily spend an hour or two seeing everything they have to offer. I tried on a ton of different pieces and ended up buying a few different things.

We also went into the Brooks Brothers store because their Beverly Hills location is absolutely gorgeous! 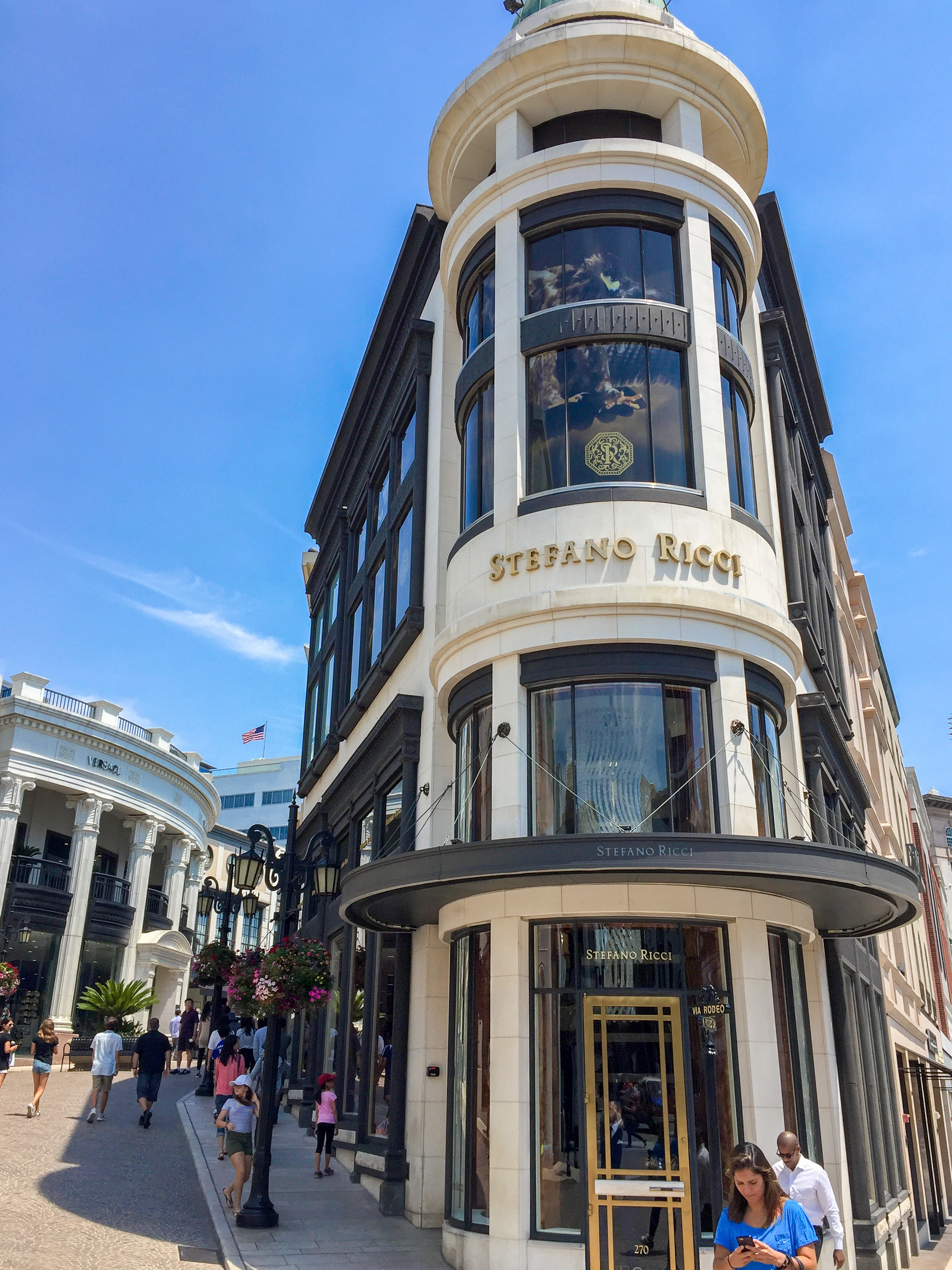 I know this post was super long but hopefully it gives you some inspiration for your next trip to LA! There’s obviously so much we didn’t get to see on this short trip but Joe and I agreed that we’re already excited for our next Los Angeles adventure!

A Festive Weekend at The Chase Park Plaza St. Louis