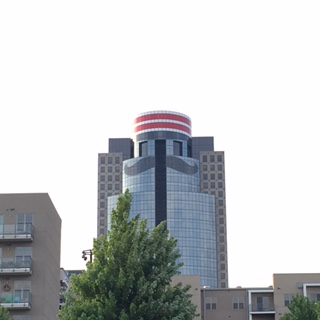 I have been waiting for July 2015 for what feels like a lifetime. Why? Because the All Star Game is taking place in Reds country this year! As a sports junkie, I was on cloud nine when I heard this news. I’m a born and raised Cincinnatian, so any national event that takes place in the Queen City gets me excited, especially when baseball is involved.

Because there’s so much more to All-Star week than the actual game, the girls of Thread Cincinnati wanted to share a guide to the great neighborhoods of Cincinnati. We all have expertise in different areas of the city, and thought it would be nice to give some insight into the areas we love!

Today I’m going to be sharing the places I love downtown and at The Banks (the neighborhood of Great American Ball Park where the game’s taking place). I could write a love letter to downtown Cincinnati, as it’s home to most of my favorite places in the city. You’ve probably seen pictures on my Instagram feed or in the background of blog pictures. It’s my happy place, and I think any visitor would instantly fall in love with it. I hope you enjoy these tidbits on my choice downtown spots, and if you need any other tips, shoot me an email!

After you’ve checked out my suggestions, head over to Preeti’s blog to read her guide to Northern Kentucky!

I’m a girl who loves champagne, and I believe bubbly is best served on a hotel rooftop overlooking the city. Top of the Park at the Residence Inn is my go-to summer drinking spot, and I promise you won’t be disappointed! You’re instantly transported to a chic, relaxed atmosphere that’s a nice little escape from reality. Did I mention the rooftop has two levels?

21c Museum Hotel has two bar options that I love. One is the bar at Metropole, the restaurant located on the first floor. This would be great for those non-All-Star activities when you want something a little fancier. The hotel also has a smaller rooftop bar with picturesque city views. 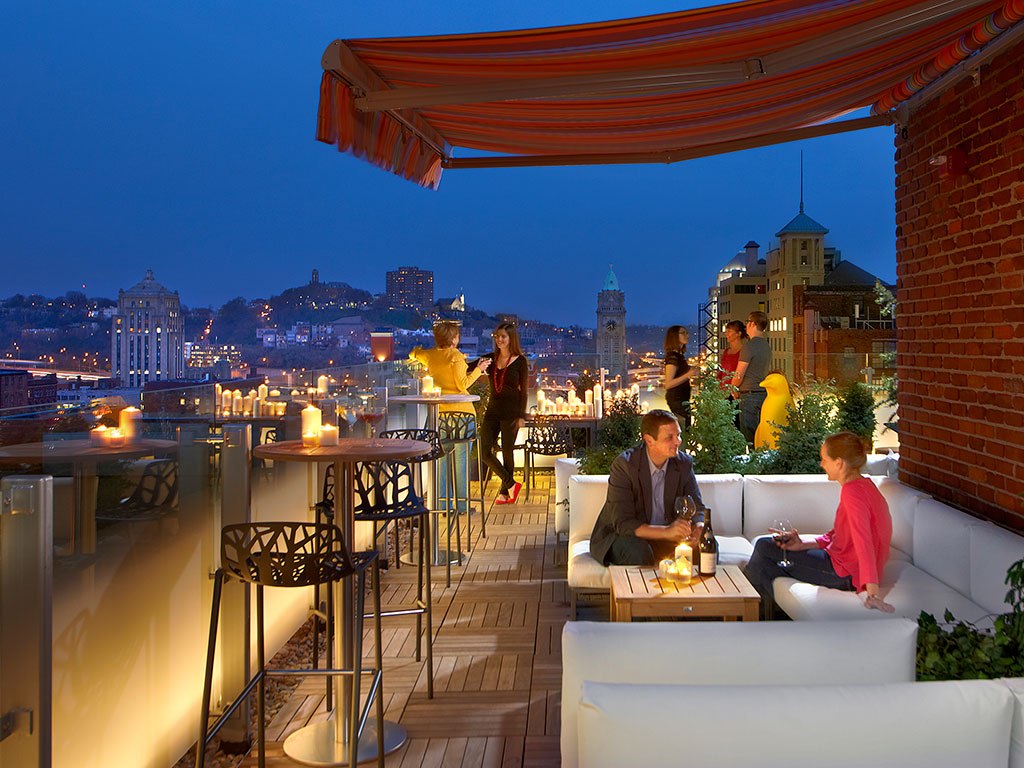 If you want to be in the heart of the All-Star action, Jefferson Social is your spot! Located at The Banks, there’s space inside and out to enjoy a cold drink, and you can even see the stadium from the outside patio. They have an extensive craft beer and cocktail list, and also a Mexican-focused food selection! You can’t go wrong with the tacos.

Speaking of Mexican, Nada is hands down my happy place when it comes to dining. If you love guacamole and margaritas, please eat here and thank me later. Their menu has something for everyone, including vegetarians like myself. This is also a great place to dine outside and enjoy the weather. 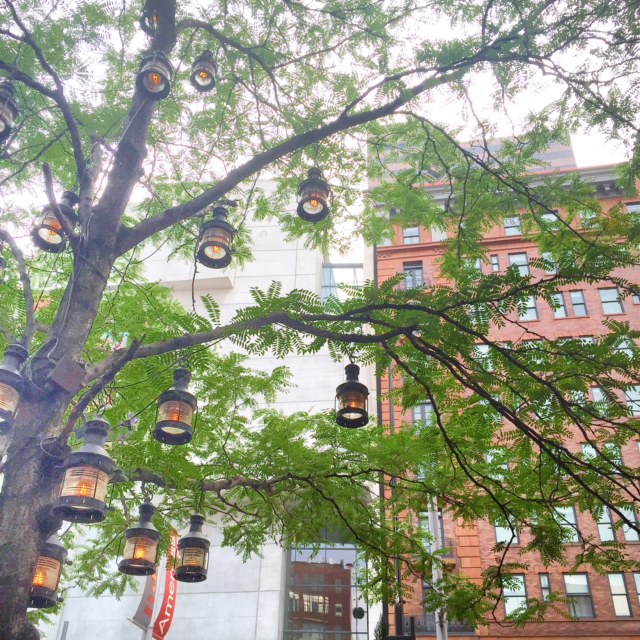 Looking to celebrate your All-Star week trip? Go all out with the best steak dinner in town at Jeff Ruby’s. Now, I don’t actually eat meat, but everyone else in my life does, and it’s the best of the best. I can vouch for the amazing sides that you won’t regret adding to your meal. The glamorous art deco vibe instantly transports you to another world, and I would do anything to have one of the chandeliers in my dream house. 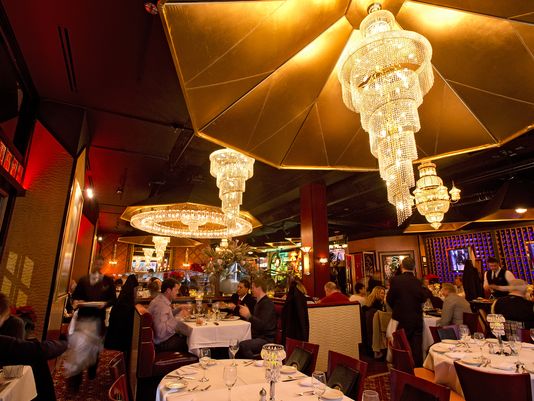 Moerlein Lager House is guaranteed to be alive with the All-Star spirit. It’s steps from the stadium, and features an extensive menu and beer list. They brew their own beer, so you’ll be getting a taste (pun intended) of Cincinnati’s rich brewery history. 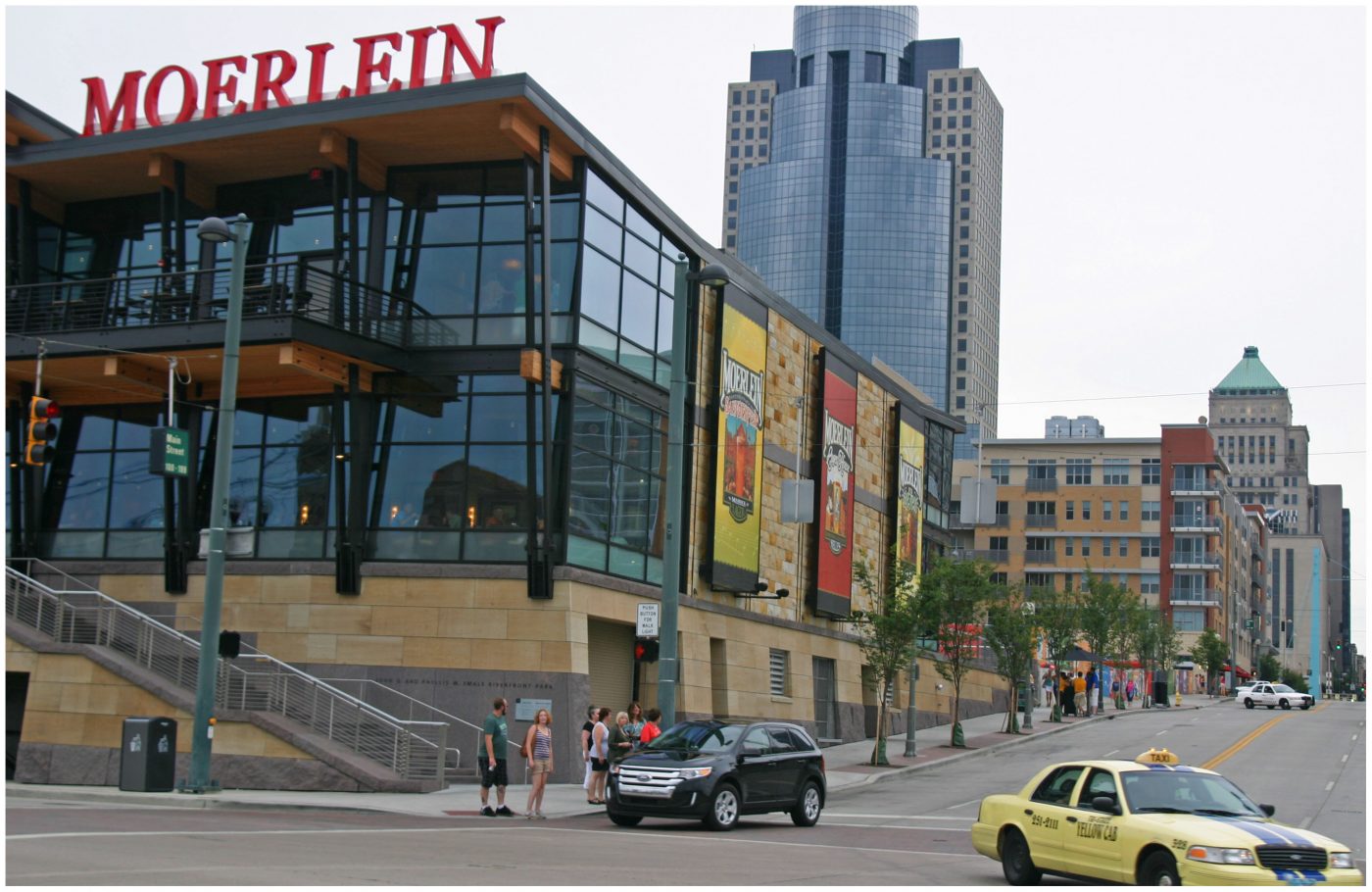 If you’re looking for some high-end retail therapy while in town, Saks Fifth Avenue is your place. It’s in the heart of downtown Cincinnati, so you’ll be in the center of the action. 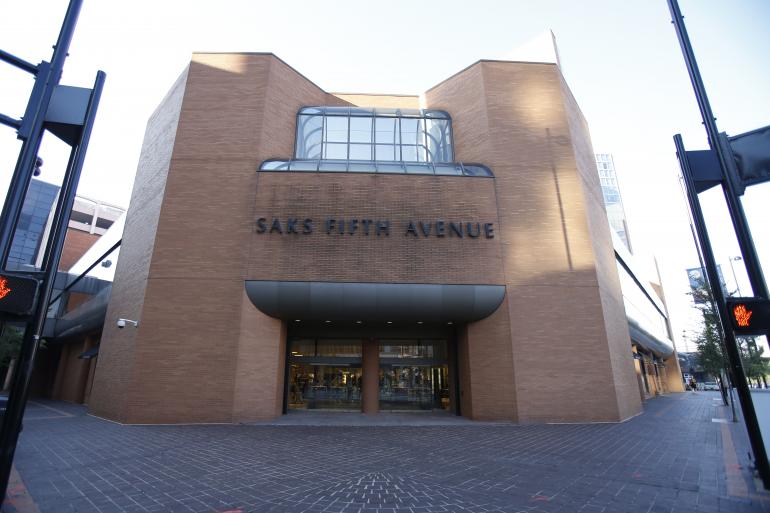 For all you bookworms, I can’t say enough about the Ohio Book Store. My boyfriend (who is an avid reader) and I stumbled upon this store a few years ago, and it still feels like I’m entering Narnia each time I go. There are levels and levels of books waiting to be discovered. 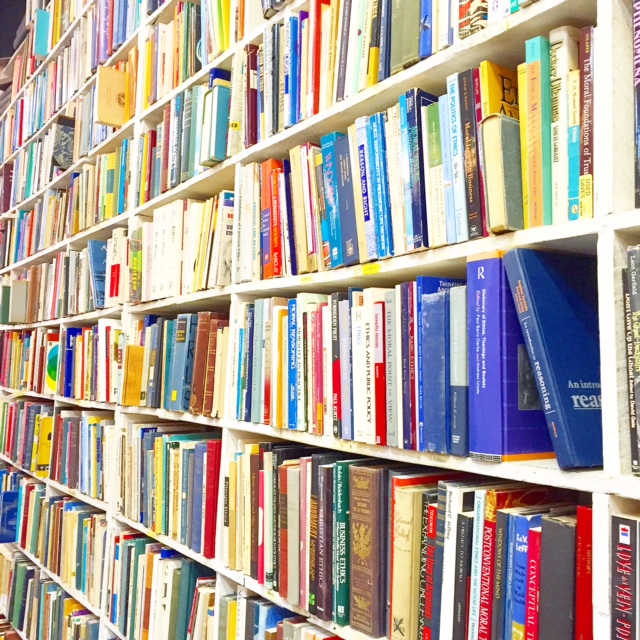 Need a last minute outfit or pair of shoes? Macy’s near Fountain Square is your best bet. The store is spread out over multiple levels, so you should be able to find everything you need. Did you know Macy’s is headquartered here in Cincinnati? You learn something every day ;).

Smale Riverfront Park has been one of my most frequented places since it opened. There’s so much to do and see that you could make a whole day of it. Located along the banks of the Ohio River, there’s greenery, tons of flowers, fountains galore and a giant foot piano! 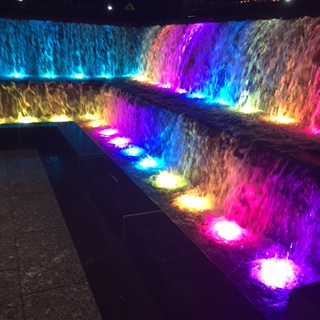 Fountain Square is the epitome of Cincinnati life. It’s in the center of downtown Cincinnati, and is a constant gathering place for all walks of life. I love standing just close enough to the fountain to get a nice little mist in the summer. There’s also a massive TV screen that airs Reds games and other events. Basically, it’s a great place to hang out and people watch! 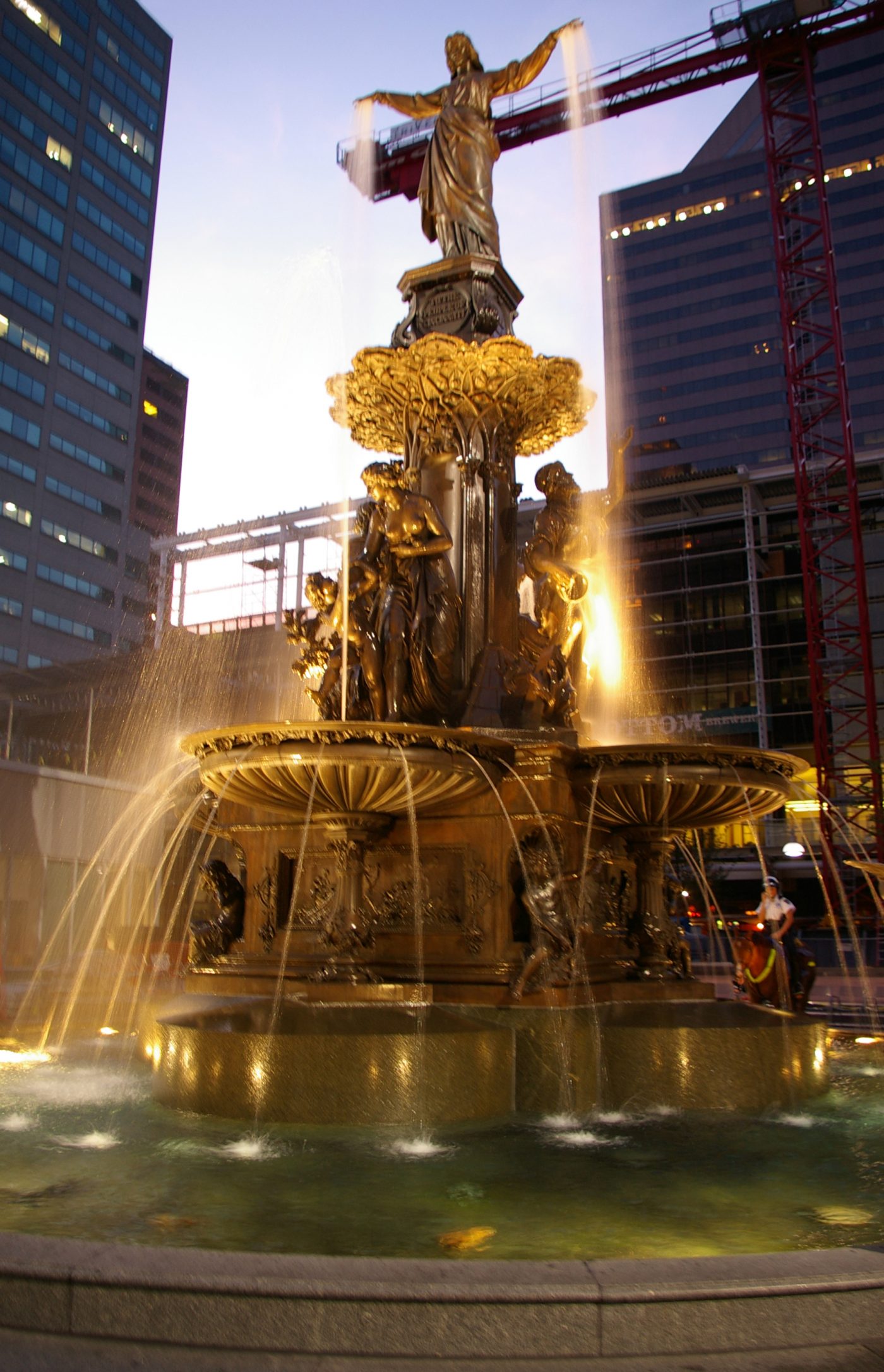 The Serpentine Wall is an area along the riverbank that literally looks like a serpent. There are rows and rows of curved concrete that snake along the river, making it the perfect spot to take in the scenic views. 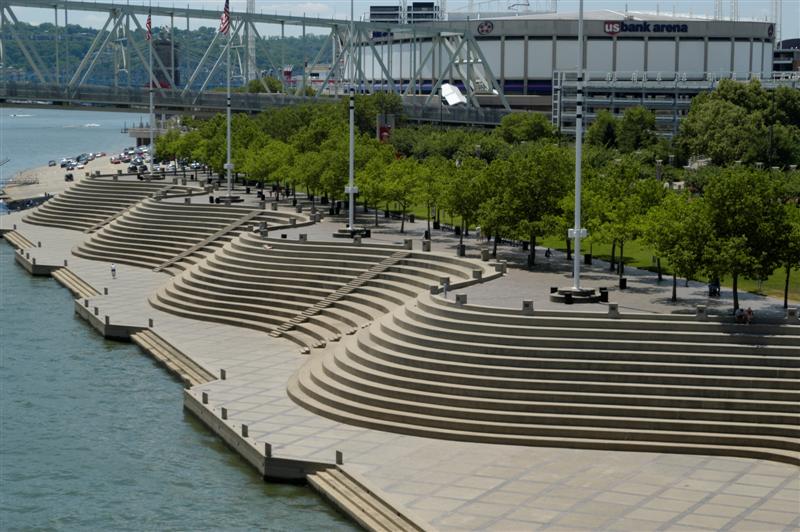 Our Wedding! A Colorful Summer Day to Remember